The Strange Case of Dr Jekyll and Mr Hyde


Two reviews in a week! It's some sort of miracle. This is my first book (well, novella) completed for the Victorian Celebration. You can still join in the fun here. My goal was to try some new-to-me authors, and I have never read anything by Robert Louis Stevenson. I especially was excited to read this after recently visited Edinburgh, home of Stevenson. I'll write a little bit more about that at the end for those who plan to skip it. 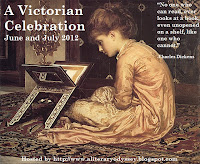 So, The Strange Case of Dr Jekyll and Mr Hyde. We all seem to know the basics of this story. I can't even remember when I learned of it--probably as a child. It's such a popular reference that I doubt there are many that don't know. I'm one of those strange readers that prefers to know absolutely nothing about a book before picking it up to read. Knowing who Hyde is didn't ruin the book for me, but what I wouldn't give to have read it back in the 1800's when it wasn't common knowledge. It must have been so exciting to read and try to figure out who this evil man was and what his connection was to the upstanding Dr Jekyll.

It's a quick little read and leaves you with plenty to ponder. I don't want to start a discussion on the duality of our nature, but Jekyll is an interesting character. Most interesting in the fact that his friends thought they knew him, but they really didn't. I think we've all come across people like that in real life. 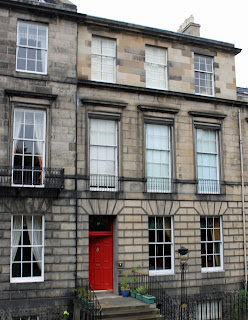 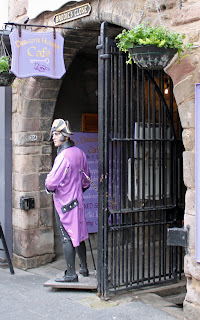 During my visit to Edinburgh, we took a guided tour bus (we were tired and too lazy to walk). We were able to see the home in which Robert Louis Stevenson grew up. It was pretty fun listening to the stories the guides would tell, one of which was that a man named Deacon Brodie was the inspiration for the story of Dr Jekyll and Mr Hyde. Brodie was a respectable cabinet-maker by day, and by night a robber of his wealthy clients (after making wax impressions of their keys). Wow, classy guy. Sorry for the not-great quality of pictures. The bus was a'movin'.

Overall, The Strange Case of Dr Jekyll and Mr Hyde, is a quick read and was well-worth the time. After this experience, I'm looking forward to reading more by Robert Louis Stevenson--maybe a little Treasure Island. 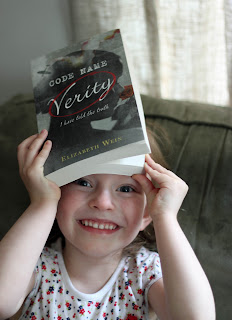 Do you like my little model? I was getting bored just using cover images, and I'm not creative enough to take a cool picture of just the book. My solution--use a cute kid (she is mine so I'm particularly biased). That should do the trick.

I'm not usually a new release reader. If I get around to them within a year of release, I'm pretty lucky. This book fell into my hands in an unusual way, for me at least. I had seen this review by Nymeth (go read it--it's excellent, as always), and added it to my ever-growing TBR list, assuming I'd get to it in a year or two. The next week I received an email from netgalley offering me the book as a "read now." I've never even requested a book from netgalley. I have a teeny tiny blog so despite the fact that I didn't find anything interesting the only time I looked, I never felt like I could justify requesting a book. But hey, if you're offering it to me, why not? So I downloaded it to my kindle and sort of felt guilty. Well, netgalley and the publisher win because I loved it so much that I bought a copy and will probably buy more copies to distribute to my family (so they don't steal mine). I don't feel guilty anymore.

I'm sure you're sick of my rambling up until this point so let me tell you now what I can about the book. Which isn't much. For very good reasons. This is a book that should not be spoiled. I know there is a debate over whether a book can actually be spoiled. Let me tell you now that in my opinion, this one can.

Code Name Verity centers around two young women serving their country during World War II. It opens with one of the girls being interrogated by the Gestapo after being captured in France. She's been allowed to write down her story.

My word of caution with this book is that it starts out slowly. It will pick up. Just push through. Once you hit about halfway through, you won't want to put it down. The first half was good, but I didn't quite get why everyone loved it. Once I hit the last fifty pages or so, it all made sense. Elizabeth Wein crafted this story so well, but it isn't apparent until it's all wrapped up.

I can't say enough about the two young women in the story. I appreciate it at my age, but I would have loved to have read this as a teenager. Friendship is the center of the story. It's so refreshing to find a YA novel about girls that deals with friendship rather than a romance. There is no romance at all. Just two incredibly strong and brave young women, who would make wonderful role models for young girls.

This book is one of only a handful that have made me cry. It takes a lot. To put it in context, The Fault in Our Stars didn't make me cry. I couldn't hold back with Code Name Verity. It was that affecting, but not in a manipulative way. For days afterward, just thinking about the book made my heart ache. I will never forget this book, and I will read it again before the year is through.

I'd hate to say this book is for everyone because no book is. I will say that I would encourage people to at least try it. I anticipate seeing this book on many year-end lists of favorite books.
Posted by Kristi at 2:25 PM 18 comments